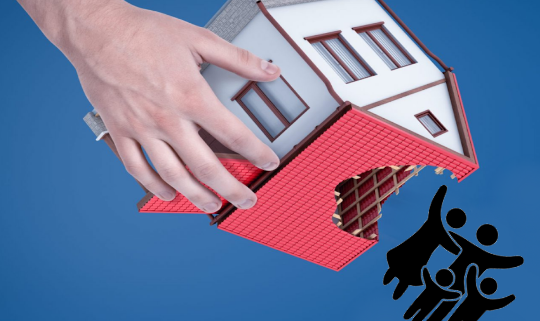 On 1 June 2021 hundreds of thousands of people across the country woke up to the shocking news that they could face homelessness, due to the government’s ending of the eviction ban. Across Teesside, local residents are finding that the last safety net separating themselves from being forced out onto the streets has been removed, with the incomprehensible decision by Housing Secretary Robert Jenrick to end the ban on evictions and reduce eviction notice periods without any additional measures in place to help renters or cancel arrears.
This has prompted a national crisis. Research has shown more than 840,000 people across England and Wales, including 5% of all renters in the North East, have built up arrears because of covid-19, and are now vulnerable to being forced into homelessness. The hardest hit are young people, self-employed people, and those working in the construction and computer services sectors. Hundreds of thousands of families with children are worried about being evicted within three months.
We know this looming homelessness crisis will hit Teesside hard. A huge number of people in our communities are trapped in poor quality, precarious rented accommodation. Middlesbrough has the highest proportion of its wards in severe deprivation of any local authority in the country, with other towns across Teesside not far behind. Local attempts to regulate the private rented sector have been resisted by threatened legal action by landlords. Local councils have services in place to support those in housing need (if you are facing eviction please contact your local council’s housing service to find out what they can provide), but they have been overstretched by drastic cuts to council budgets since the Conservatives came to power in 2010. In addition higher deprivation creates more demands on council budgets – in Middlesbrough for example 35% of the town’s budget is now spent on children’s social services, three times more than a decade ago, which leaves less funding available to face this coming homelessness crisis.
While the end of the eviction ban will doubtless bring on more misery and homelessness, Teesside residents have long become used to poor and precarious housing. Many find accommodation through informal routes, with no checks to ensure prospective housing is in a fit condition. There is evidence of private landlords sometimes pocketing their tenants’ housing benefits while failing to provide them basic utilities. Adding to the unregulated housing market is the impact of the government’s cruel ‘hostile environment’ against those born outside the UK, including 1,500 current asylum seekers in Teesside who have less access to state benefits or legitimate routes for housing and so are sometimes forced to rely on less secure housing options.
We also know that in our area, while we have not had the levels of rough sleeping seen recently in larger cities, there are still many experiencing street homelessness. They have reported through the pandemic that many services which they relied upon have dried up due to covid-19, leaving them even more vulnerable. We know there are still excellent volunteers and workers on the ground supporting the most vulnerable, but the fear is that with the end of the eviction ban, the homelessness crisis locally will grow exponentially and services will be stretched even thinner.
Housing Action Teesside, are a group of local residents campaigning for fairer and more secure housing in our community which puts people before profit – with anyone who shares our aims welcome to join us. The government may be content to leave the most vulnerable renters in a dire and precarious situation, but we believe collectively we can fight to leave nobody in our communities behind.